I’ve been following an author and authortuber named Sarra Cannon and her Heart Breathings journey. She’s incredibly knowledgeable about both writing craft and the business aspect of being an indie publisher.

One of her video themes is about productivity and specifically, the way that she uses a Kanban board (click HERE to see one of her videos about it) to track her goals for each quarter of the year. I absolutely fell in love with this visual method of setting goals and then tracking them as you go, so I decided to give it a try. 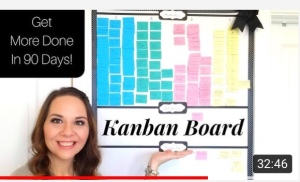 If you don’t know what a Kanban board is, it is basically a three-column chart that allows you to place sticky notes at different places on the board depending on whether they need to get done, are in progress, or are completed. There are a ton of videos online about it and how you can alter it according to what you want, but I liked the idea of there being an “In Progress” section because I hated having things on my To Do list that were being worked on, but hadn’t earned that infamous check mark yet.

I was so excited at the end of June that I went out and laminated a large, white poster board because I wanted to be able to change it up and now sticky notes and even washi tape come off of it easily so I can customize it as I want. I decided that I wanted to have four total goals, some of them more broad than others. And like, Sarra, I wanted to try to focus on quarterly goals so these would be things I wanted to accomplish from July to September.

2. Plan and prepare for back to school (orange)

4. Finish a manuscript that I was editing (dark pink–later became blue)

In parentheses is the color of sticky note that was going to be used for each task. On the left, there is a sticky note that describes each goal. I used washi tape to divid the board into three sections and then spent some time dividing each goal into actionable tasks and layering them onto the top section of the board. Each sticky note is a single task associated with that goal. For example, for the manuscript I was editing, I divided it up by chapter. For social media, I listed out specific tasks like blog writing, batch photo shooting, and scheduling all as separate notes.

I was really proud of what it turned out like and thought I was going to nail each and every one of those things.

About half way into July, I realized that the goal that I set for the pink sticky notes (to create two Skillshare classes) wasn’t exactly something I actually wanted. I thought it would be a great experience, but just planning and filming and editing the first intro video quickly became something that I decided was not going to work out. So, as you can see in the next picture, I took it off of my board completely.

At first, I was afraid to remove it because I hate waste but I hate selling myself short even more. But I actually asked Sarra through her Facebook group and she told confirmed what I already knew inside: if it didn’t work for me, take it off!

Because at the end of the day, staring at a huge list of tasks that I’m not completely excited about or feel is critical in my life, is just inviting anxiety and pressure into my life that I don’t need!

This was a revelation for me. I am a box-checking kind of gal and so removing this goal was a huge freedom moment for me because now I’m more focused on getting things done that I actually want to do. Isn’t that crazy?

Anyways, here’s the current progress of where I’m at so far and I still have less than half of August and all of September to finish them off!

**The pink sticky note on the left is measurements for something, not related to a goal.

Not bad, right? I’m excited for finishing off my board and can’t wait to create a new one for the final quarter of the year. It has been a lot of fun seeing the sticky notes “move” as I decided to tackle things, even if they weren’t completed yet.

How do you stay on track and motivated with your own goals? Do you use something like this? I’d love to see it or hear about it!

I'm an author, teacher, wife, and mother of three who just finished an MFA program and is working on a YA fantasy novel. Daha fazla yazı görüntüle

One thought on “Attempting to use a Kanban board”

This site uses Akismet to reduce spam. Learn how your comment data is processed.